Basel Institute to support B20 India as Network and Knowledge Partner B20 Indonesia Summit: Recover together, recover stronger, and address corruption through Collective Action The Business 20 (B20) represents the voice of business in the G20, an intergovernmental forum representing the world's major economies. It acts as a platform for dialogue between businesses and the G20 presidency, which rotates each year, with input from civil society and international organisations.

As a multi-stakeholder forum for international economic cooperation, the B20 concentrates on topical high-priority issues that affect the stability and strength of the global economy and the ability of companies to compete on a level playing field.

Given the B20's influence on both government policies and the private sector, it is crucial that issues of business ethics and integrity are central to B20 recommendations.

This open online resource is designed for policymakers and practitioners from any sector involved in B20-G20 anti-corruption dialogues. It provides:

We hope it will support the continuity and effectiveness of each new B20 cycle, giving stakeholders the information they need to understand past cycles and extract lessons learned.

Visit the UNODC G20 Anti-Corruption Resource page to find out more about the anti-corruption work at the G20. 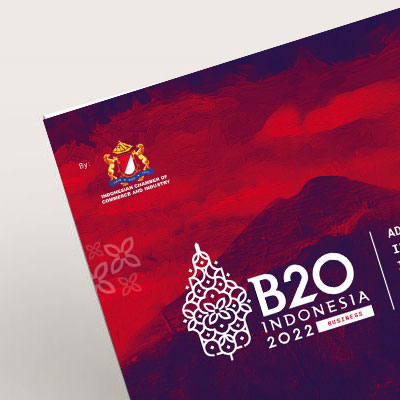 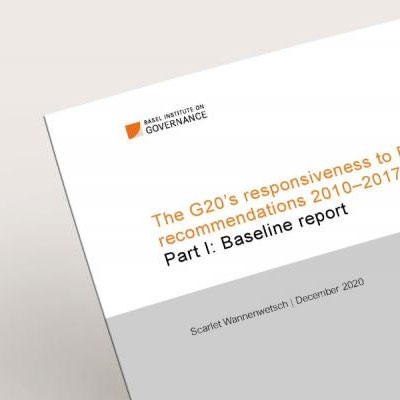 B20 Integrity and Compliance Task Force: Key Reflections and Suggestions from Members

2021 | The B Team; World Economic Forum Partnering Against Corruption Initiative

FAQs on the B20 process and anti-corruption

When and why was the B20 established?

The B20 was initiated by the Canadian Council of Chief Executives (renamed Business Council of Canada in 2016) during the 2010 Toronto Summit. It was initially referred to as the G20 Business Summits.

Its establishment followed the global financial crisis of 2008-2009, which highlighted the need for the structured and inclusive involvement of business in the G20 process.

More generally, the B20 aims to promote and enable dialogue among policymakers, civil society and business at the international level.

How does the B20 process work?

The leadership of the B20 rotates every year together with the G20 presidency. There is no standing Secretariat.

Each hosting country decides on the structure and format of its B20 process. Although there are no hard requirements for how the process is managed, some “soft” working structures have evolved over the years.

Typically, the B20 Secretariat establishes a series of taskforces (working groups) focused on priority topics. The focus areas and topics are usually determined through surveys of stakeholders participating in previous B20 cycles.

After convening a series of discussions, the taskforces generate recommendations on their focus areas.

In four of the cycles since 2010, the B20 Secretariat has not established dedicated taskforces. Instead, the process has revolved around a single private-sector summit.

The so-called B20 Sherpa, who is responsible for the operational management of the Secretariat, consolidates recommendations into one public policy document. This is presented to the G20 Leaders at the B20 Summit, for consideration to be included in the G20 Leaders’ Communiqué.

How have B20 cycles dealt with issues of integrity and anti-corruption?

Most years, the B20 presidency has established a dedicated taskforce on anti-corruption, integrity, ethics or similar.

Although it has been given different titles, such as Integrity and Compliance Taskforce (Saudi Arabia), or Improving Transparency and Anti-Corruption Taskforce (Mexico), the working method remains similar and provides clear ownership of the topic within the B20 process.

In contrast, other presidencies have chosen to integrate corruption as a cross-cutting theme. For example, the German presidency in 2017 opted for a cross-thematic Working Group on Responsible Business Conduct and Anti-Corruption, which was responsible for introducing corruption topics into all of the B20 workstreams.

The Australian presidency in 2014 took a dual approach, setting up a standalone anti-corruption taskforce but ensuring that issues of business ethics and integrity were also on the agenda of the other taskforces.

View a detailed comparison of the different approaches from 2010 to 2017 in a Basel Institute analysis: The G20’s responsiveness to B20 anti-corruption recommendations 2010-2017. Part I: Baseline report.

What kind of integrity topics does the B20 focus on?

The initial B20 cycles focused mainly on high-level issues, for example requests for all G20 countries to sign the UN Convention Against Corruption (UNCAC) and OECD Anti-Bribery Convention. Other notable areas included identifying prudential standards to address terrorist financing, tax havens, and how countries deal with the proceeds of corruption.

Both the topics and recommendations in more recent cycles have become more business-focused and action-oriented. Recurring themes include how governments can incentivise compliance, the establishment of public-private partnerships, the use of Collective Action tools to address corruption challenges, open data standards on beneficial ownership, and corruption in public procurement.

Despite the lack of formal continuity between B20 cycles, the list of integrity-related issues has developed over time and has been largely carried forward from year to year.

Who is involved in B20 anti-corruption dialogues?

Besides business representatives from the G20 countries, the B20 anti-corruption workstream also engages with civil society through organisations including the B-Team, Open Government Partnership (OGP), Basel Institute on Governance and Transparency International (TI).

Other participants are from academia and business associations, notably the International Chamber of Commerce (ICC).

Collective Action initiatives such as the World Economic Forum’s Partnering Against Corruption Initiative (PACI) have contributed alongside international organisations including the Organisation for Economic Co-operation and Development (OECD), United Nations Office on Drugs and Crime (UNODC), International Labour Organization (ILO) and others.

Bringing together the business sector, policymakers, civil society and anti-corruption experts helps to shape the discussion and support the development of informed and practical recommendations.

What happens to B20 taskforce recommendations on anti-corruption?

Generally, the anti-corruption taskforce (where one exists) publishes detailed policy recommendations in a public document. The document is intended for the G20, but is also aimed at the business community more broadly.

This document is submitted to the B20 Sherpa for inclusion in the final B20 document, which is presented to G20 leaders at the B20 Summit.

There may also be the opportunity to present the full B20 anti-corruption policy paper and recommendations to the G20 Anti-Corruption Working Group (ACWG) to inform its work and identify future priorities.

How does the G20 address anti-corruption?

The G20 established a permanent Anti-Corruption Working Group (ACWG) in 2010 during the G20 Toronto Summit.

The work of the ACWG is primarily structured through its bi-annual/tri-annual Anti-Corruption Action Plans. These are designed as the central working document to capture and translate G20 commitments into action. The ACWG reports on the progress made on an annual basis to the G20 Leaders, which in turn endorse the Action Plan in their Communiqué at the final Summit of each G20 cycle.

Learn more about the G20 ACWG in section 4.4 of The G20’s responsiveness to B20 anti-corruption recommendations 2010-2017. Part I: Baseline report.

B20 work on anti-corruption

Recommended reading on anti-corruption in the B20-G20 process

General commentary on the G20, business and anti-corruption

OECD contributions to the G20 on anti-corruption

B20 process analysis and review mechanisms

This resource is developed and maintained by the Basel Institute on Governance with funding from the Siemens Integrity Initiative.

The Basel Institute is a Network Partner of the B20 Italy Integrity and Compliance Taskforce in 2021. Our Collective Action team has been an active participant in the anti-corruption discussions of the B20 since its inception in 2010.

Please send comments, questions and suggestions relating to the B20 anti-corruption work and this resource to: scarlet.wannenwetsch[@]baselgovernance.org.